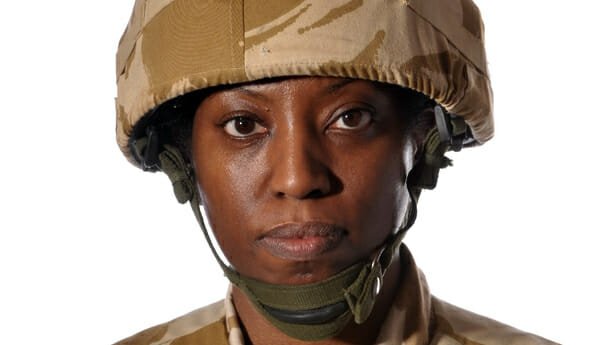 My progression through the Special Forces has been swift and well deserved. As the only woman to make it into MI5s so called “Anonymous Unit”, the last few weeks have been spent tirelessly trecking through Peru. The mission: Find, intercept and prevent a drugs deal with street value in excess of 10 Billion GBP. A lot has changed since my early days in the Forces. Hair cropped short, and face somewhat hardened, the comrades have nicknamed me 3B (Three B’s: The Brutal British Bitch). I got here the hard way, and the rumours are true: No man has ever managed to withstand my harsh (and not strictly legal) interrogation techniques. I don’t do the meanial work; When my boots are on the ground, I mean business. My job is to crack El Castillio, the notorious drug lord who has remained elusive and escaped our clutches for nearly a decade. In the back of the armoured vehicle, I open my wallet: therein lies a small amount of local currency and nothing else. No cards, no photos, no keys. Strictly speaking, “we” don’t exist. My radio crackles and I swiftly tune it in to frequency 1090Hz. Immediately I recognise the voice of Jack Judson, nicknamed High3 (he used to be called High5 but we switched it up on account of him having lost two fingers in a Russian arms deal gone wrong – long story)

“3B…”
The radio crackles
“3B to High3. Received. Do we have Goldilocks alive? (all our suspects are given the names of fairy tale characters, no one can quite remember why)
“Affirmative Ma’am.” High3 replies “But it’s going to take a sledgehammer the size of the Amazon to crack this one”
“Received High3. Good thing you’ve got me on board. We need him at base by 5pm. If you see so much as a sand lizard on your way, shoot it dead, then shoot it again”. I order.
“Affirmative Ma’am”
The radio crackles and cuts.

Time to get to work.

By the time I get to base it is 6pm. Sundown is early in this part of the world and we have had to change routes three times to avoid detection. Our inside man, face wrapped in a bandana meets me at the entrance to our base.

“Bandino” I say, without looking at him, “Thank you”.

I shove an unmarked brown envelope stuffed with local currency into his hands and within moments he disappears into the night. Before visiting El Castillio, I re-enter the back of the armoured vehicle and change into civilian clothes. This type of detainee will need an unorthodox approach. I leave the vehicle, feeling the cool night breeze on my now bare legs.

I enter the unit, a large suitcase trailing behind me. It’s a small, dimly lit room, and El Castillio is sat on a steel chair with his arms cuffed and cable tied behind his back, and his legs also secured. Stage One of the interrogation process is designed to crack those who are the most weak willed. I know it won’t work, but Geneva convention, yadda yadda, combatants must try reasonable force first. Dressed in my army boots, denim hot pants and a cropped blouse, I walk towards the detainee, looking him directly in the eye, my gaze never faltering.

El Castillio begins talking, a thick accent making his words almost indistinguishable.
“No entiendo… porque estoy aqui -” he begins
“Okay so let’s cut the crap”. I interrupt. I’ve read your file, I know you speak English.
His tone immediately changes and he responds in perfect, measured English, his glare meeting, but not quite matching mine
“What do you want?” He asks. “You want money? I have more money than you can dream of”.
“We know what’s happening at 12:00 hours tomorrow, we just don’t know where” I reply.
El Castillo pauses for a moment, clearly surprised at our Intel.
“Why would I tell you that ahh?” He asks “You can’t extradite me, you can’t kill me, and if you jail me I will have paid my way out by sunrise so what makes you think I’m going to tell you about my… business affairs?” A smirk spreads across his defiant face.

Still bound to the chair I approach El Castillio. Without a word and with the swiftness of a true professional. I unbuckle his trousers. I see his brow furrow, trying to work out what I’m about to do. I pull his trousers down to his ankles. He knows better than to struggle- he’s going nowhere. I stride to the suitcase, and remove an unmarked tinted bottle. I unscrew the top and walk back to the detainee. Stood between his legs with my back towards him, I unbutton my shorts, and pull them down, efficiently. My bare, peachy bottom, exposed in front of him. I bend over to pick up the bottom, making sure Castillio gets a full view from beind. In the bottle is no poison, no truth serum or skin irritant – just a simple oil. I pour the oil over my ass and casually take a seat on El Castillios lap. Of course, his cock leaps to attention hardening between my bum cheeks. I hear his breath quicken and his chest heaving behind me. I sit there for 5 minutes or so without moving; then slowly begin rocking backwards and forwards on his lap, I stand up then turn around, straddling him on the chair, with nothing but the warm oil between us.

Looking into his eyes, I stroke the side of his face, an immaculate manicure tracing a rough, hairy cheekbone.
“Castillo. How about you tell me where the deal’s taking place?”
I ask.
I push myself right up against him, his cock erect and pressed against my bellybotton. We are nose to nose. I put my arms around him and rest my head on his left shoulder. Speaking softly,
“If you tell me, no repercussions, no arrest, we go or separate ways and you keep face.”
El Castillo stays silent, but his body betrays him. Chest to chest I feel his heart beating frantically beneath his shirt.
“No?” – I ask. I lick the sweat from the side of his face – “No?”
Casually, I lift myself up slightly, then lower myself slowly onto his cock. His arms strain against the cable ties which bind him to the chair. Another trickle of sweat courses down his temple. 10 seconds of heavy nose breathing as I sit there motionless, eye to eye and sat on his throbbing cock. I begin to ride him; at first slowly, but then… The heat of the jungle… 18 months with no sex… finally face to face with my enemy… who part of me begrudgingly admires… passionately I ride his cock like a machine, sweat running down my back, keeping frantic pace for 5 minutes or so until I feel him ready to explode.

Just as it’s about to happen I abruptly stand up.
“What?” He tries to lunge towards me, but of course, is incapable “Get back here, you little bitch!”

I stand in front of him, squatting slightly so we are at eye level, and laugh in his face.

“Just tell me, where the deal is taking place?” I press, “Tell me…”
I reach down my nails teasing his balls

I run to my suitcase, scrabbling to find a pen and notepad, then returning to his chair with both in hand. “Go on then Castillo, tell me what you know” My face is etched with eager anticipation, my pen poised to take the coordinates

His mouth assumes a small smirk, eyes blinking up at me with an earnest humour

“Suck my dick, bitch.”
He replies.

A hot wave of anger washes over my face. I feel my temper rise – no one makes a fool of me. No one!
Time to initiate Level Two.